I’ve had a lot of flack since writing about Atheism .  It odd because it seems that Theist wouldn’t mind if i was announcing converting from say Judaism to Scientology or becoming a Mormon or  Amish ; but to openly announce that you have faith in the belief that there is NO GOD at all  becomes an outrage to which they respond very badly.  They tend to take the offensive position.

If you are likely to be personally offended because I am asking difficult questions in relation to  any faith or  ‘God’, please don’t read on. I am not seeking to offend.  I am requesting a Theists insight.

Often you see,whilst browsing on FB or the internet, little posts offering a prayer or  anecdotes to explain why ‘God’ has seemingly ignored a prayer.  Here’s one I’ve seen  before but happened to appear again shortly after my last blog:

Me: Why did You let so much stuff happen to me today?

God: What do u mean?

Me: Well, I woke up late. : My car took forever to start. At lunch they made my sandwich wrong & I had to wait.   On the way home, my phone went DEAD, just as I picked up a call. : And on top of it all off, when I got home ~I just want to soak my feet in my new foot spa & relax. BUT it wouldn’t work!!! Nothing went right today! Why did You do that?

God: Let me see, the death angel was at your bed this morning & I had to send one of My Angels to battle him for your life. I let you sleep through that. : I didn’t let your car start because there was a drunk driver on your route that would have hit you if you were on the road.    The first person who made your sandwich today was sick & I didn’t want you to catch what they have, I knew you couldn’t afford to miss work.    Your phone went dead because the person that was calling was going to give false witness about what you said on that call, I didn’t even let you talk to them so you would be covered. Oh and that foot spa, it had a shortage that was going to throw out all of the power in your house tonight. I didn’t think you wanted to be in the dark.

Me: I’m Sorry God
God: Don’t be sorry, just learn to Trust Me…. in All things , the Good & the bad.
Me: I will trust You.
God:
Me: I won’t God. And let me just tell you God, Thank You for Everything today.
God: You’re welcome child. It was just another day being your God and I Love looking after My Children…
REPOST if you Believe in HIM

Harmless enough – if not a little contrived. So I thought this time instead of just ignoring it as foolish and far-fetched, I would present different  scenarios in the hope that the Theists might provide some insight using, perhaps, the same tools to explain.  I wanted to know what the answer from God would be to the following scenarios.  surely not “And don’t doubt that My plan for your day is Always Better than your plan”:

Scenario 1 “God can I ask you a question, yesterday a tsunami hit and all my family were killed including my wife who was pregnant with our 4th child”.

Scenario 2 “God can I ask you a question for four years now our crops have failed , we pray for rain, our children die of dysentery and starvation, slow painful deaths, why did you not answer the payers of all our village”

Scenario 3: “God tell me – we are a loving family we go to church, pray , lead a christian life, yet my wife is struck down with ME, my son has ADHD and my mother has just been diagnosed with bowel cancer, can you not hear me am I not a faithful follower”

I didn’t get the response I expected , or rather I did but I’d hoped for more.  I got accused of not respecting other people’s beliefs as  I’d declared I did in my previous blog.  So I reread it and I  don’t see that my question is offensive.  Unless the doctrines of the various religions cannot account for them and the followers feel threatened by having such anomalies to their practice of prayer, raised.

These scenarios and many others like it are of genuine concern, sadly things like these happen all the time to countries, communities or individuals; both theists of various faiths and atheists irrespective of faith, prayer, church attendance etc.  So I hoped someone from any religion would offer me a religious view of the lack of ‘Gods’ intervention in the various situations.  The benefits of having faith, belief, prayer in such scenarios.

When bad things happen to good people, it is , as far as I can tell, either passed over (the blind eye  enabling the blind faith) or dismissed as  “free will”,  or “God works in mysterious ways”. Mostly side lined.

I’d be happy to be enlightened, offered insight .  But no Theist seems to be prepared to discuss such scenarios.

What about the 6 million dead Jews during the holocaust – why weren’t they protected by their God? Why weren’t they saved the suffering and pain.  Why did God not ‘Cast down his wrath” on the ‘bad guys’?  Was theirs (the Jews) the wrong God, or the wrong set of doctrines in line with the God?

I try to understand  how Theists don’t see the irony and juxtaposition of their comments. Say, for example, 999 people die in the train wreck, 1 child is found alive.  God is thanked for saving the one.  what about the other 999???  What about the pain and trauma to the poor child to have live through the crash and lost his parents – what did he do to deserve that?

Any Theists out there want to have a crack at explaining any of the scenarios I’ve presented? I’d be grateful.  I’d really like to understand more.  This is not an attack on any individual faith, or any faith; it is merely a request for clarity.  It is not a sign of disrespect.  It’s a question that I feel it’s reasonable to ask. Surely?

12 thoughts on “Seeking insight from Theists for us Atheists…” 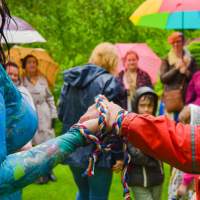